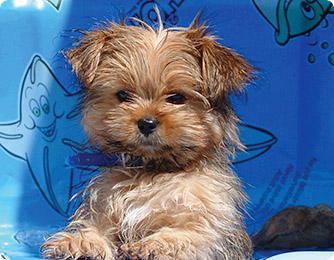 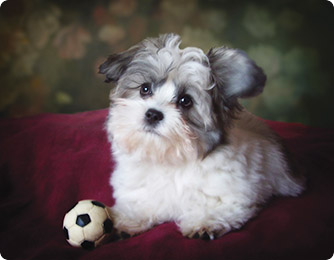 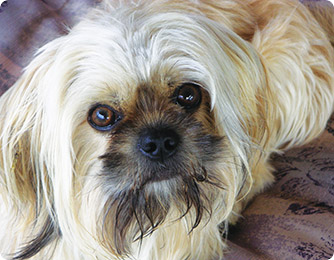 The Ocherese is a relatively new breed of dog developed in the United States by Janet Dilger in the 1970’s. Pronounced “Oh sure ease”, the name is a combination of ‘ocher’ and ‘ese’. ‘Ocher’ hints at the golden ‘ochre’ color tones common among Ocherese (though Ocherese can sometimes have black and gray tones). The ‘ese’ is borrowed from Pekingese and Maltese, two of the three breeds involved in the creation of the Ocherese breed. The Ocherese has soft, silky, non-shedding, non-matting hair, in a wide variety of colours, and should have a thin, but apparent undercoat. The body is compact, with short, feathered legs, and a long, plumed tail. Their eyes are not set far apart like the Pekingese, but are very dark and round, giving them an aware, intense expression. Typical weight of a full-grown Ocherese is between 5-12 lb (2-5 kg), with a height of 9-12 inches (23-30 cm). Ocherese tend to be kind, eager to please, intelligent, and trusting. Though typically gentle and calm, they can become very sprightly and fun-loving when excited. They are widely considered to be ideal household companion dogs.

Circa 1970, Janet Dilger, a Pekingese breeder located in Southern Indiana, had become increasingly concerned by birth defects she was discovering in her newborn puppies and decided to take action. Her goal was to produce a small, calm, healthy animal, with long hair that did not shed. To achieve this end she crossed her show Pekingese with a small Toy Poodle. The results, known as Pekapoos, aimed her in the direction she wanted to go, but she was not satisfied with the coat texture. The final step was taken when she then mated one of her female Pekapoos with a male Maltese. The puppies from this mating were described by Dilger as ‘nothing short of marvelous, so she decided to continue with these as the foundation stock of a new breed, which she christened the Ocherese.